Well, with this new version – 1.6.2.4 – available for download here https://go.microsoft.com/fwlink/?LinkId=615771 you can now configure selective PHS if you want to exclude some accounts from synchronizing the password hash to Azure AD.

To do so you will have to update an attribute (adminDescription) on your user’s Active Directory objects and edit the synchronization rules.

Depending of the number of user’s objects to exclude for the password hash synchronization, the process is a little bit different.

After having edited the adminDescription attribute with the value matching your requirement, you will have to stop the synchronization before editing the rule

Then using the Synchronization rules editor, edit the rule In from AD – User AccountEnabled and make an editable copy as prompted when editing a built-in rule 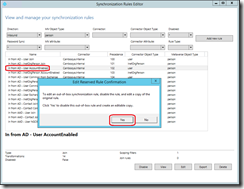 Then you can re enable the synchronization with the command

And finally run a full sync with the command

NOTE if the adminDescription attribute is not populated or does not have the correct value, then PHS will continue to work as before.